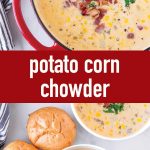 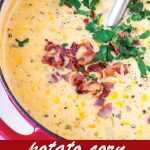 Cold weather calls for comforting soups! This cozy and creamy potato corn chowder with bacon is my ultimate winter soup. It is made with tender red potatoes, sweet corn, bacon, veggies, broth, cream, and so much more. All in one pot for easy clean-up!

This potato corn chowder is also freezer-friendly, so you can always make a big batch and freeze the rest for later to satisfy all your soup cravings.

I love how creamy and cozy this soup is. It’s so, so delicious and easy to make. You will absolutely love it!

I crave comforting soups all the time, especially during winter. There’s nothing better than a warm bowl of soup and a side of bread for dinner!

I love this easy potato corn chowder because it’s made with lots of cozy ingredients, such as tender potatoes, sweet corn, and bacon. I also love that it’s creamy! I just really like creamy soups in general, and this one is one of my faves.

Plus, it is made in one pot for easy clean-up! I don’t know about you, but I absolutely love one pot recipes, especially when I don’t feel like doing a lot of dishes.

This potato corn chowder recipe makes a big batch, enough for about 6 to 8 people. I always make a big batch because it reheats really well for next day’s lunch.

I love all the ingredients in this potato corn chowder! The veggie base and fresh herbs add so much flavor, and the tender potatoes and sweet corn add really nice texture and body. The cream also makes it extra creamy, cozy and delicious!

Per usual, the specific ingredient quantities can be found in the recipe card below, but here’s a quick overview to give you an idea:

This is a very easy potato corn chowder recipe. It takes about 1 hour to make, and it comes out so delicious!

Here is a top-level overview of the process, to give you an idea. As always, the full detailed recipe can be found in the recipe card down below.

It’s so easy to make!

This potato corn chowder is freezer-friendly, but here’s the thing: dairy doesn’t freeze very well. Soups that contain dairy turn out a bit grainy when thawed. Fear not, though! This just means that you have to add the dairy when reheating the soup.

Here are some substitution ideas:

As for pairings, I love serving this potato corn chowder with a simple salad or a side of bread. I love these recipes:

I love the tender potatoes, sweet corn kernels, and the bacon here. Three of my favorite ingredients in one soup! Plus, it’s creamy and absolutely delicious.

This recipe makes a big batch, enough for about 6 or 8 people. It reheats really well, which is perfect for lunch the next day. Also, if you want to freeze it, you totally can! Just follow the freezing instructions in the recipe card’s notes below. It’s easy-peasy.

I hope you like this soup as much as I do. Happy cooking! 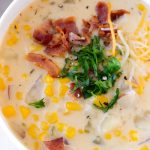 Tried this Recipe? Tag me on Instagram!Mention @CookingForMySoul or tag #cookingformysoul. Or leave me comment below!
« Hearty Beef Barley Soup
Red Pepper and Sausage Egg Muffins »