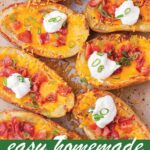 We’re huge fans of these Loaded Potato Skins, made with the classic cheddar cheese and bacon combination. They are baked until tender, and crispy and golden brown.

The toppings in these loaded potato skins include crispy bacon and melty cheddar cheese, as well as sour cream and green onions. It’s an American classic, a true favorite!

This recipe is make-ahead friendly for ease and convenience. You can even freeze the potato shells for later.

You’ll love these baked crispy potato skins, loaded with cheese, bacon, sour cream, and scallions. They are the perfect side dish for ribs or anything with BBQ, and also great appetizers for parties or game day!

If you like potatoes, cheese, and bacon, it’s impossible not to like these loaded potato skins. They are seriously delicious!

I recently made these AMAZING Slow Cooker BBQ Baby Back Ribs and served them with loaded potato skins. They are the perfect combination and can’t wait to share the recipe with you today!

Here’s why I love these loaded potato skins:

Aside from the BBQ Ribs, I also love serving these loaded baked potato skins with this succulent Spatchcock BBQ Chicken, as well as this Huli Huli Chicken and Baked Popcorn Chicken.

These loaded potato skins are baked until tender and fluffy, and then baked again until buttery, crispy, and golden brown around the edges. The second baking process crisps up the exterior skin even more, making every bite extra crispy and enjoyable.

They are loaded with these toppings:

As for size, make sure the potatoes are not too large, otherwise they will take extra time to bake.

Poke holes all over them with a fork. This reduces bake time, helps with air flow, and prevents them from bursting. Do NOT wrap with foil, as this will prevent the exterior from crisping up. Rub potatoes with olive oil all over. Bake for 1 hour at 400 degrees F. Flip them over halfway through.

Tip: Use medium sized Russet potatoes. Larger potatoes will take too long to bake. I would recommend using only Russets because their skin is thick and they crisp up really well (texture).

Flip the potatoes, cut side up. Top with cheese and cooked bacon. Bake again for 2-3 minutes until melted at 425 degrees F.

Make Ahead and Freezing Instructions

Make ahead: Bake the potatoes, remove the flesh, and bake them on each side until golden brown and crisp (step 4 in the recipe card down below). Refrigerate in containers for up to 3 days. When ready to eat, season, brush with oil, and top with cheese and cooked bacon. Bake at 425 degrees F for 4-5 minutes or until melted. Bacon can be cooked up to 3 days in advance.

Freezing: It’s best to freeze the empty shells and top them when ready to bake, as the quality of cheese can go down after it’s been frozen. Freeze the empty potato skin shells for up to 2 months. When ready to bake (no need to thaw), top with cheese and cooked bacon and bake at 425 degrees until melted and warmed.

I love serving potato skins with Slow Cooker BBQ Ribs. I swear, the tender and flavorful ribs pair really well with loaded potato skins. These are my go-to mains to serve with it:

Are there any shortcuts to bake potatoes faster?

Yes, you can cut the potatoes in half before baking to reduce the baking time by half. Instead of 1 hour, bake for 30 minutes.

Can I make it ahead?

Yes, make the baked empty shells up until step 4 in the recipe card down below. When ready to make, brush with oil, season with salt and pepper, and top with cheese and bacon. Bake according to directions, plus a few extra minutes as needed. Additionally, the bacon can be cooked up to 3 days ahead.

How do I freeze potato skins?

You can freeze the empty shells for 2 months. When ready to bake (no need to thaw), season and top with cheese and cooked bacon and bake at 425 degrees until melted and warmed.

What can I do with the leftover potatoes?

You can use it to make mashed potatoes, shepherd’s pie, loaded baked potato soup. Or adapt it to make potato corn chowder.

Can I make these in the air fryer?

Yes, but you need to bake the potatoes in the oven separately. After you have scooped out the flesh from the potatoes, brush with oil or butter and season. Air fry at 400 degrees for 5 minutes. Then top with cheese and bacon, and air fry for another 2-3 minutes until melted.

This recipe was published in 2019 and updated in March 2022 to include new photos and information, plus a few recipe modifications. 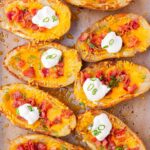 Substitutions and variations:   Disclaimer: Nutritional values (per serving) are approximates only.